For a detailed guide for this event, see Fishing Tourney 22 (Knitted): How to Play.

Chip which utilizes the

Fish could be obtained various ways:

Fish could be turned in to Chip at any point during the tourney, although once the player had at least 20 fish in their inventory Chip would automatically collect them all.

The player only received one trophy at the end of the event, for the highest level earned.

Any tourney nets left over at the end of the event will stay in the player's inventory and may be used in future fishing tourneys at either location.

The event-specific Fish for the Fishing Tourney 22 (Knitted) are:

These were timed goals which lasted the entire duration of the event period. The Event Challenges (Chip's Challenges) are as follows:

All of the fish caught by the player and given to Chip will have their sizes added to a total combined size. When this combined size reaches a goal, the player receives a reward. Excluding trophy rewards, one of the items within that reward pool will be randomly selected. Rewards will not be duplicated until all of the items have been given. 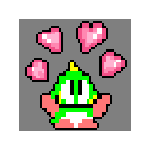