Brake Tapper is a slot machine mini game mode which can be found at OK Motors next to Carlo. A player can spend

Friend Powder to play this mode to win

Caps which can be traded in for materials and exclusive rewards. 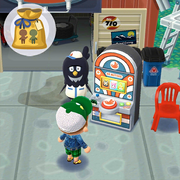 How to Play[edit | edit source]

There is a single large button in the center of the slot machine that a player can interact with. Pressing this button starts the game.

The first button press will spin the coin at the top of the machine to determine whether or not a player has a chance for Bonus Caps, otherwise the base prize will be 5

From left to right, the order of the characters for each column (slot) are as follows:

If a player manages to match all the columns, a player will win the 5 Caps + any bonus Caps.

When a player first presses the Brake Tapper button to start the game, a coin spins at the top of the machine to determine whether a player has a chance at earning bonus caps (if a player wins).

If the coin lands on:

A player can trade-in the caps they have earned by talking to Carlo (max three times per day). The machine itself displays a list of rewards and the daily amount of coins + Huge Wins won.

These are items which can be traded for Caps.

Other Tables and Resources